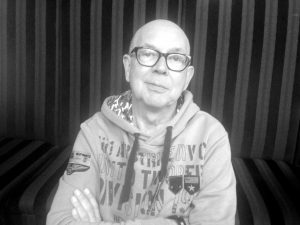 Ad van de Laar was born in the village of Someren in the Dutch province of Brabant.
Being creative at a very early age he played in a beat-band as a solo guitar-player and composed several works among which the most recent (2010) “The Painting Black shadows”.(The video)
Also he was a text-writer for stand-up comedians. His great passion was designing (which is still recognizable in his current work).
However, carrying on a business at home his creative energy found a way out in portraits, still lives and landscapes (all in pastel).
He exhibited his works both at home and abroad, like for instance at the Mall Galleries, the Pastel Society in London, the Hyatt Hotel in Brussels and Museum The Wieger in Deurne, The Netherlands.

After working in pastel for a number of years he started looking for more colourful ways of expressing his creative ideas. The works by Mondriaan, Karel Appel, Corneille, Kadinsky, Andy Warhol and Jeff Koons strongly appealed to him. He started looking for his own style and ultimately found it in the every-day and omnipresent felt-tipped pen. He found out that by using this cheap material no lasting works of art could be made.

A renowned, retired gallery-keeper advised him to use more durable materials like acryl. Painting in acryl demanded a totally different technique and the first results didn’t at all content him. In the end he found acrylic felt-pens of museum quality which in combination with acrylic paint and the acquired techniques enabled him to achieve results that were satisfying to him.
From this the fantasy-art acryl paintings originated with figures in colour, line and motion. Ad van de Laar doesn’t care a bit about the rules of art and he entirely follows his own path. Thus he has developed his very own style, a style so unique that he can genuinely be called an avant-garde artist.
As colours are determinant to him he shows them to their full advantage by means of black contours round his figures (‘shadows’ as he calls them).

Meanwhile he has attracted the world’s attention in Modern art, and presently invitations are pouring in from countries such as Germany, Cuba, the USA, Mexico, the UAE, Italy, Senegal and Russia, and these days his works are being exhibited all over the world.